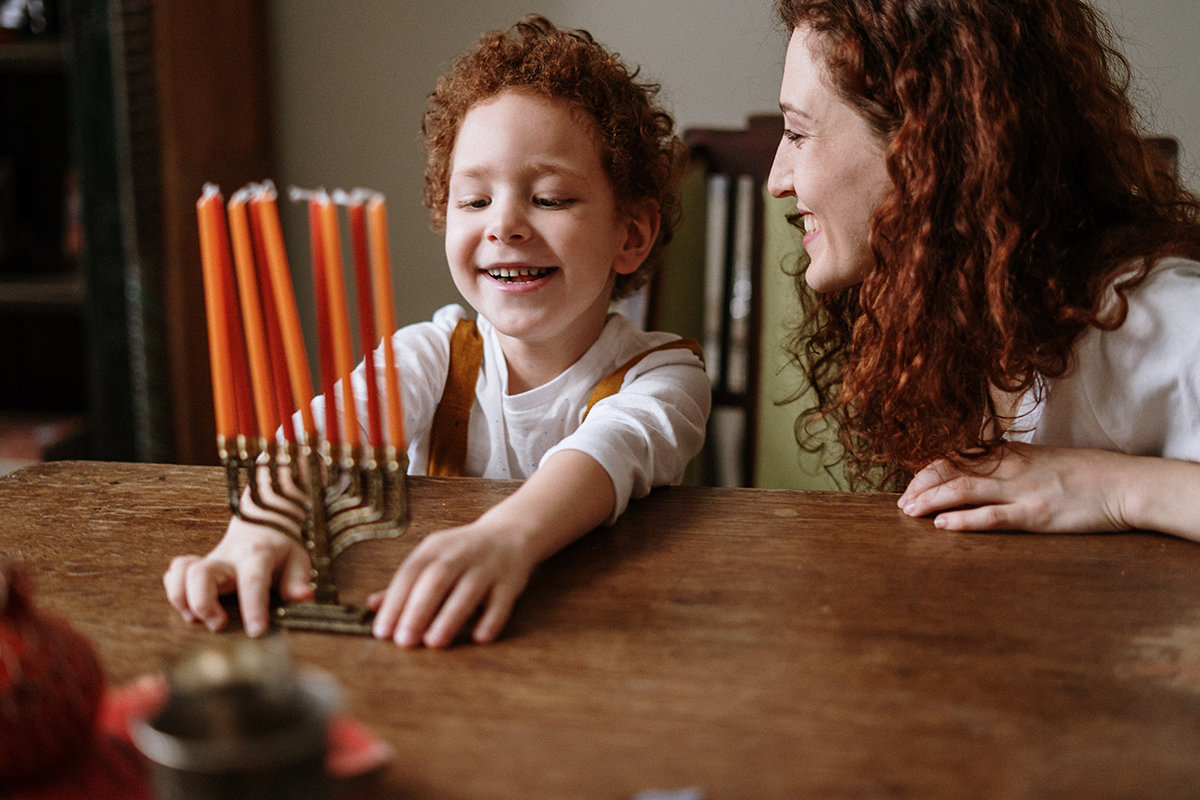 Hannukah jokes add laughter to family get-togethers during the Festival of Lights. Your children will love a couple of Hannukah jokes during the eight-day celebration as they use the shamash, helper candle to light the candles of the menorah each day after sundown. One candle is lit on the first night, two on the second, and so on.

Hanukkah Jokes to Bring the Giggles

Menorahs are the centerpiece of the Hanukkah celebration. Some people collect menorahs – vintage menorahs, artsy menorahs, themed menorahs, and more. Some families light one menorah together as they recite Hannukah prayers and sing Hannukah songs. In other families, each family member lights his/her own special menorah on each of the eight nights of the celebration.

The menorah is lit for the 8 nights of Hannukah, which means dedication, to commemorate when the Maccabees lit the menorah after reclaiming the temple from the Greeks. The one-day supply of oil lasted 8 days. Let the laughter begin with a few Hanukkah jokes.

Two menorahs are sitting in the window. One turns to the other and says, “Wow, it’s getting hot with all these candles.” The other looks back and says, “Whoa, a talking menorah!”

Why are there only 8 days of Hanukkah? Because 7 ate 9.

What’s the difference between Hanukkah and a dragon? One lasts for eight nights, the other sometimes ate knights.

Read More: 17 Hanukkah Food Recipes to Satisfy All Your Cravings

With Hanukkah upon us, how does a Jewish man prepare his tea? Hebrews it.

Miriam goes to the post office to buy stamps for her holiday cards. She asks the cashier, “May I please have 50 Hanukkah stamps?” The cashier asks, “What denomination?” To which Miriam replies, “Oh vey, has it come to this? OK, give me 6 Orthodox, 12 Conservative, and 32 Reform.”

Hanukkah Jokes about latkes (and potatoes) and sufganiyot (and doughnuts), oh my

It is a Jewish custom to eat foods fried in oil during the 8 days of Hanukkah in remembrance of the miracle of the oil lasting for eight days. Latke is the Yiddish word for pancake. Latkes are made from shredded potatoes. They are delicious. And sufganiyot, are Israeli donuts, a cross between a beignet and a jelly donut. Hanukkah jokes about the scrumptious fried foods will delight everyone at the dinner table.

Out for dinner on Hanukkah, I asked the waiter if my latkes would be long. He told me the chef prefers to make them round.

What do you get when you put an elephant and a load of potatoes together? Mashed potatoes.

One Hanukkah, a Jewish husband said to his wife, “I think there’s something wrong with these latkes, dear. They taste awful.” His wife replied, “That shows you what you know. The recipe book says they’re delicious.”

Who is the most powerful potato? Darth Tater

Read More: The Story Of Hanukkah

I asked my dad if he could fry some potatoes, flour, and egg in a shallow patty for me… He said, “That’s a latke ask for!”

Why did the potato cross the road? He saw a fork up ahead.

What do you say to a baked potato that’s angry? Anything you like, just butter it up

What do you call a lazy spud? A couch potato.

Why did the baker stop making donuts? He was fed up with the “hole” business.

Where was the first donut cooked? In Greece.

What kind of donut can fly? A plain donut.

Why did the donut go to the dentist? To get a filling.

Hanukkah Jokes About Dreidels Will Keep You Spinning With Laughter

It’s not funny if you do not win any gelt during the annual game of dreidel during Hanukkah, but Hanukkah jokes about dreidels will keep everyone laughing as you play. Dreidel is a traditional Jewish game played with a four-sided top each with a letter of the Hebrew alphabet: נ‎ (nun), ג‎ (gimel), ה‎ (hei), ש‎ (shin). Depending on which letter your dreidel lands on you either put your gelt (chocolate foil-wrapped coins) into the kitty, receive none of the gelt, receive half of the gelt, or collect all of the gelt. Dreidel is a fast-paced game for all ages with candy, so be sure to add a few Hanukkah jokes during the game for a few extra laughs.

What’s a dreidel’s favorite song? “You Spin Me Right Round.”

Read More: Celebrate your Holiday: Christmas and Hanukkah through Food, Fun, and Decor

How much Hanukkah gelt did the skunk get? One scent.

What do you call a Jewish rapper? Dr. Dreidel.

Why did the dreidel go to the doctor? It kept getting dizzy spells.

Funny Hanukkah jokes are “latke fun.” You don’t have to have a “gelt-y” face when making someone laugh and smile during the eight nights of the Festival of Lights. Enjoy your family. Enjoy the traditions. Enjoy the food. Happy Hanukkah!