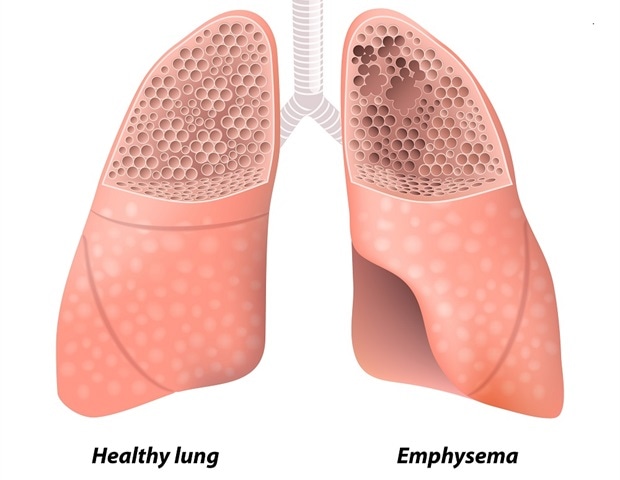 The vast majority of people infected with the omicron variant of SARS-CoV-2 experience mild cold-like symptoms, moderate flu-like symptoms, or no symptoms at all, but the virus is so transmissible that it still spread deep into lung tissue to cause severe disease and death in thousands of people in the United States in 2022 alone. Researchers at the University of North Carolina at Chapel Hill revealed biological reasons for how disease progression happens and why a certain population of asthma patients are less susceptible to severe COVID.

This research, published in the Proceedings of the National Academy of Sciences, illustrates the importance of a well-known cytokine called interleukin-13 (IL-13) in protecting cells against SARS-CoV-2, which helps explain the mystery of why people with allergic asthma fair better than the general population despite having a chronic lung condition. The same cannot be said for individuals with other diseases, such as chronic obstructive pulmonary disease (COPD) or emphysema, who are at very high risk of severe COVID.

We knew there had to be a bio-mechanistic reason why people with allergic asthma seemed more protected from severe disease. Our research team discovered a number of significant cellular changes, particularly due to IL-13, leading us to conclude that IL-13 plays a unique role in defense against SARS-CoV-2 infection in certain patient populations.”

Camille Ehre, PhD, senior author, assistant professor of pediatrics at the UNC School of Medicine and member of the UNC Marsico Lung Institute

Although cytokines like IL-13 cannot be used as therapies because they trigger inflammation, it is important to understand natural molecular pathways that cells use to protect themselves from pathogen invasion, as these studies have the potential to reveal new therapeutic targets.

There are many health factors that increase a person’s risk of severe COVID, including chronic lung diseases such as COPD, but as the pandemic went on, epidemiologists found that people with allergic asthma were less susceptible to severe disease.

“These are patients with asthma caused by allergens, such as mold, pollen, and dander,” said Ehre, who is also a member of the UNC Children’s Research Institute. “To find out why they are less susceptible, we investigated specific cellular mechanisms in primary human airway epithelial cell cultures.”

The experiments were led by co-first authors Cameron Morrison, a medical student in the Ehre lab, and Caitlin Edwards, a research assistant and MPH student in the lab of Ralph Baric, PhD, Kenan Distinguished Professor of Epidemiology at the UNC Gillings School of Global Public Health and professor in the UNC Department of Microbiology and Immunology at the UNC School of Medicine.

The researchers used genetic analysis of human airway cell cultures infected with SARS-CoV-2 to discover that the expression of the human protein ACE2 governed which cell types were infected and the amount of virus found in this cell population (also known as “viral load.”)

The scientists then used electron microscopy (EM) to identify an intense exodus of virus from infected ciliated cells, which are cells tasked with moving mucus along the airway surface. EM also revealed severe cytopathogenesis – changes inside human cells due to viral infection. And these changes culminating in ciliated cells (packed with virions) shedding away from the airway surface.

“This shedding is what provides a large viral reservoir for spread and transmission of SARS-CoV-2,” Ehre said. “It also seems to increase the potential for infected cells to relocate to deeper lung tissue.”

Further experiments on infected airway cells revealed that a major mucus protein called MUC5AC was depleted inside cells, likely because the proteins were secreted to try to trap invading viruses. But the virus load kept increasing because the cells tasked with producing MUC5AC were overwhelmed in the face of a rampant viral infection.

The researchers knew from epidemiological studies that allergic asthma patients – known to overproduce MUC5AC– were less susceptible to severe COVID. Ehre and colleagues also knew the cytokine IL-13 increased MUC5AC secretion in the lungs when asthma patients faced an allergen.

The scientists decided to mimic asthmatic airways by treating human airway cells with IL-13. They then measured viral titers, viral mRNA, the rate of infected cell shedding, and the overall number of infected cells. Each one was significantly decreased. They found this remained true even when mucus was removed from the cultures, suggesting other factors were involved in the protective effects of IL-13 against SARS-CoV-2.

Bulk RNA-sequencing analyses revealed that IL-13 upregulated genes that control glycoprotein synthesis, ion transport, and antiviral processes – all of which are important in airway immune defense. They also showed that IL-13 reduced the expression of the viral receptor, ACE2, as well as reducing the amount of virus inside cells and cell-to-cell viral transmission.

Taken together, these findings indicate that IL-13 significantly affected viral entry into cells, replication inside cells, and spread of virus, thus limiting the virus’s ability to find its way deeper into the airways to trigger severe disease.

“We think this research further shows how important it is to treat SARS-CoV-2 infection as early as possible,” Ehre said. “And it shows just how important specific mechanisms involving ACE2 and IL-13 are, as we try our best to protect patients from developing severe infections.”

UK signs agreement with the US to help marginalized children secure twelve years of quality education
55 Sensory Activities For A One-Year-Old
The safety and tolerability of Remdesivir in children affected by COVID-19
15 Ways To Discipline A Toddler Without Hitting Or Yelling
Retinol When Breastfeeding: Safety & Alternatives