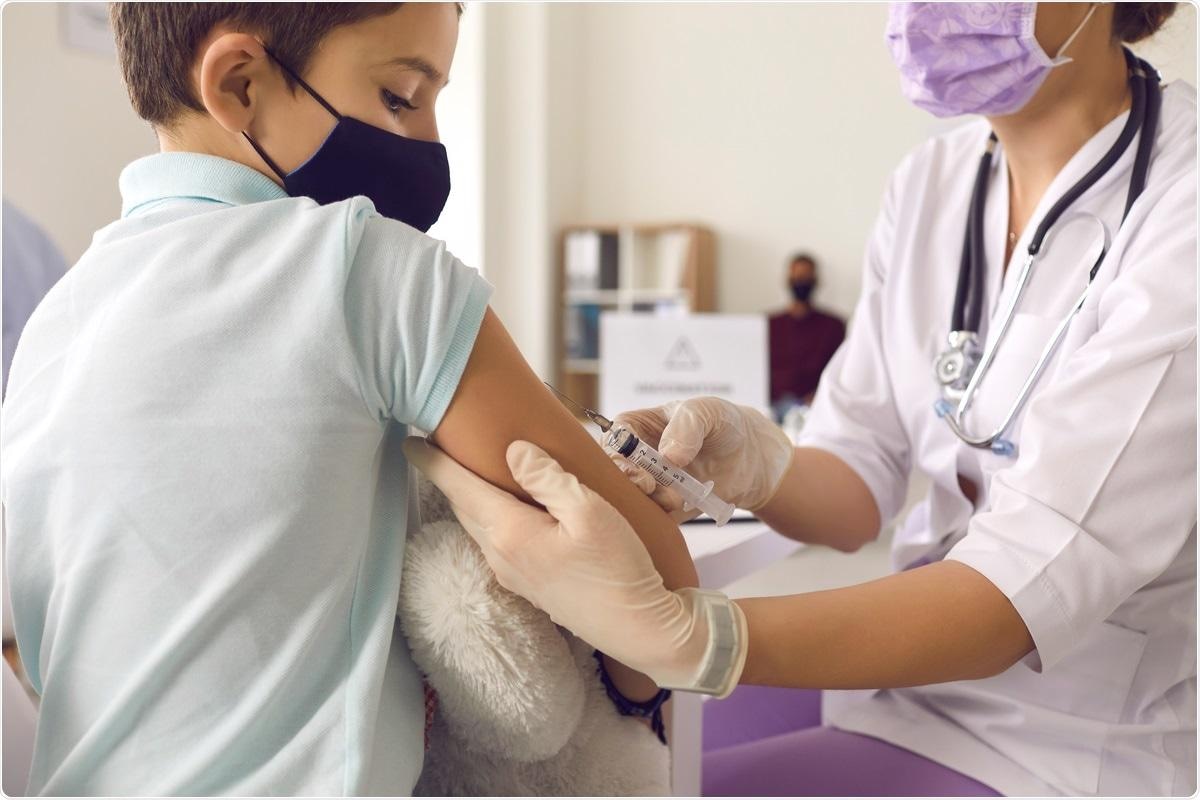 As of March 17, 2022, the severe acute respiratory syndrome coronavirus 2 (SARS-CoV-2), which is the virus responsible for the coronavirus disease 2019 (COVID-19), has infected over 464 million and caused almost 6.1 million deaths. Early on in the COVID-19 pandemic, researchers around the world races to develop safe vaccines against SARS-CoV-2, which led to the development of two messenger ribonucleic acid (mRNA) vaccines in December 2021, followed by several other vaccines based on other platforms.

In a new study published on the medRxiv* preprint server, researchers discuss the efficacy of COVID-19 vaccines in young people and children when the SARS-CoV-2 Delta and Omicron variants were the dominant circulating strains.

Earlier studies have explored the transmission of SARs-CoV-2 among children stratified by age, seroprevalence rates in this age group, as well as the clinical aspects of the infection among children. Vaccination studies were examined in other studies and included information on specific pediatric disease cohorts and the relationship between vaccination and disease severity.

The mRNA vaccines were tested in clinical trials in minors and found that most symptoms among the vaccinated were mild and transient. In the current study, multiple components of the United Kingdom vaccination campaign for children and young people (CYP) aged 12-17 years were evaluated based on a single dose of the Pfizer mRNA vaccine.

The current study used data from over 100,000 CYP who used the Covid Symptom Study (CSS) app to report their symptoms. The aim was to determine the risk of infection after vaccination with a single dose and the intensity of disease in those who experienced breakthrough infections.

The first vaccine dose was found to protect CYP against both Delta and Omicron infection, with the effect being more robust in individuals with a history of a prior SARS-CoV-2 infection. The researchers also found that disease symptoms were milder in those infected after vaccination as compared to unvaccinated and infected CYP.

During the study period between August 5, 2021, and February 14, 2022, approximately 26, 000 CYP were vaccinated with a single dose of the Pfizer vaccine. Over the next 14-30 days, the risk of infection dropped 80% for Delta and about 54% for Omicron variants. At two to three months after vaccination, the risk of infection further declined by about 62% and 64%, for the Delta and Omicron variants, respectively.

During the Delta-dominant period, the reduction in risk after vaccination was higher than that which was recorded during the Omicron period for at least the first three months in adolescents aged 16-17 years and at least two months post-vaccination in those aged 12-15 years. During the Delta-dominant period, the probability of being risk-free was over 90% for the first 11 weeks and fell just below 90% at 90 days.

Conversely, during the Omicron-dominant period, the chances of remaining free of infection were greater than 90% at 30 days, and greater than 80% at 40 days. The risk of infection was significantly lower among those with prior infection and was close to zero at 100 days and beyond.

However, both for vaccinated and unvaccinated children who were infected with the Delta or Omicron variants, the median duration of symptoms was less than a day. Young people occasionally had skin lesions like blisters or weals, and soreness of the eyes, which lasted more than a day in most cases.

Less than 2% of CYP visited the hospital over the entire study period, vaccinated or unvaccinated. Post-vaccination symptoms were very mild, mostly local, and self-resolving in the majority of cases. Systemic side effects were rare and also resolved quickly.

The results of the current study demonstrate that a single dose of the Pfizer vaccine in CYP is generally safe and well-tolerated. One vaccine dose reduced the risk of subsequent infection with SARS-CoV-2 in children aged 12-15 years beginning 14 days from the day of vaccination.

This protective benefit was found to be greater against the SARS-CoV-2 Delta variant as compared to the Omicron variant. In the case of vaccinated children who had a history of prior SARS-CoV-2 infection, the protection was over 90% against reinfection for 100 days or more. According to current models, more than 90% of children in the U.K. are considered to have been previously infected with SARS-CoV-2.

Using a risk-benefit analysis, the researchers conclude that there was quantitative evidence to support the rationale for immunization of this group. This supports earlier studies showing vaccine-mediated protection against reinfection with the SARS-CoV-2 wildtype, Alpha, and Delta variants, though to a lesser extent against the Omicron variant. Furthermore, a single vaccine dose was found to reduce disease severity in case of breakthrough infection.

Since the current study was carried out during the period when both the Omicron and Delta were circulating, its results may also be specific to these variants. COVID-19 in children is typically a mild, short-lived disease; therefore, the ability to discriminate between naturally mild disease and vaccine-mediated reduction in the severity of the disease is limited.

Even though most recommendations are for two-dose immunization of children, “our data suggest some nuance may be appropriate regarding recommendations for second-dose vaccination, considered temporally (particularly with reference to prior infection) and to new variant emergence.”