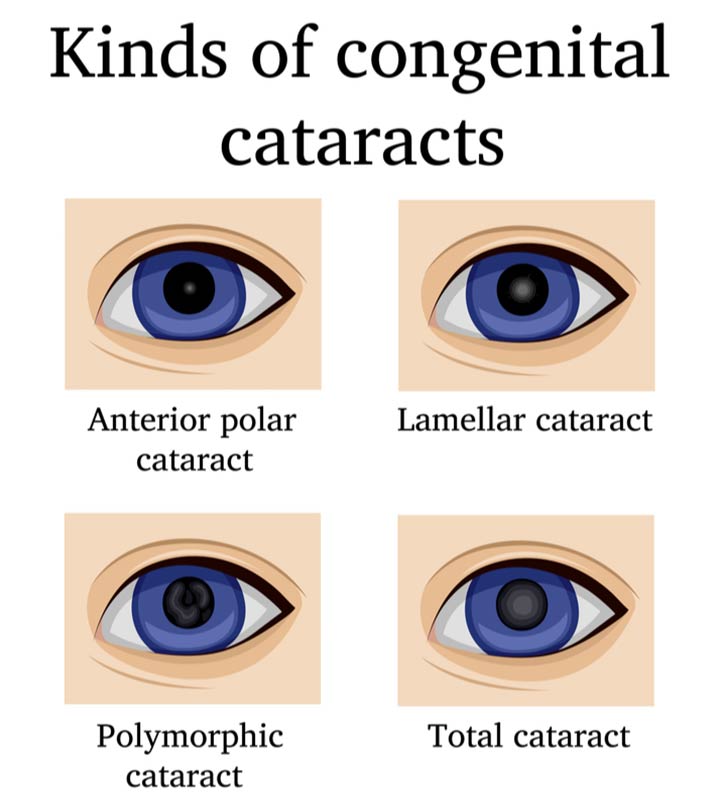 Congenital cataract is an eye condition prevalent among newborns. In this infantile disease, the baby’s natural eye lenses appear milky white from birth. Congenital cataract is different from other cataract forms. The former is mostly inherited and present at birth, while the latter develops at an older age.

Congenital cataracts are important to address as they hamper the development of nerves that connect the eyes to the brain. The white cloudiness of the lens obstructs natural vision and may lead to permanent vision loss if left untreated.

Read this post to know about the types, causes, symptoms, diagnosis, and treatment of congenital cataracts.

What Are Congenital Cataracts?

In a healthy eye, the lens remains clear, while in congenital cataracts, the transparency of the eye lens is hampered at birth (1). It is also possible to acquire cataracts after childbirth; in this case, they are known as infantile cataracts or juvenile cataracts.

The transparency and refractive index of a healthy lens are maintained by a family of proteins present in the eye lens (2). However, the natural proteins inside the eye lens tend to form clumps or protein aggregates during cataract formation. These clumps of protein are large particles that appear cloudy. In this way, a cloudy opacification of the eye lens occurs in a cataract, which sometimes results in vision loss.

What Are The Types Of Congenital Cataracts?

The common types of congenital cataracts are (3)):

What Are The Signs And Symptoms Of Congenital Cataract?

According to the National Health Service (NHS), UK and the US National Library of Medicine, a child might acquire a congenital cataract due to the following reasons (1) (4) (5) (6) (7) (8).

What Happens If A Baby Has Congenital Cataracts?

A baby with a congenital cataract may have difficulty seeing through the affected eyes. It could lead to the following scenarios.

Are Congenital Cataracts Associated With Other Problems?

Congenital cataracts are also often associated with other eye conditions such as strabismus and nystagmus (11). These are movement and alignment disorders of the eye and often lead to permanent vision loss if left untreated.

How Are Congenital Cataracts Diagnosed?

The diagnosis of congenital cataracts is performed through eye screening by a pediatric ophthalmologist (4).

A baby diagnosed with a congenital cataract should be treated under a specialist eye doctor. If surgery is required, it should be performed with urgency, as and when suggested by the doctor.

Some of the eye conditions, such as cerulean cataracts, may not need cataract surgery. An eye doctor may prescribe a corrective lens in specific cases. In such a case, routine clinical checks should be scheduled to ascertain the progress of cataracts.

How Are Congenital Cataracts Treated?

Mild congenital cataracts may not require any specific treatment, and corrective measures, such as the use of glasses, could help improve the baby’s vision. The baby will require regular follow-up to check vision quality.

Since the natural lens is lost during the cataract removal procedure, adding a corrective lens to the eye becomes important. Cataract removal surgery is generally followed by an intraocular lens (IOL) implantation procedure. The artificial lens gives corrective vision to the baby.

After surgery, a dark patch is usually advised to cover the normal eye for several hours a day. This is done for several years in order to help the operated eye gain normal vision. The doctor may also suggest contact lenses and glasses to further improve the baby’s vision. The baby will require regular check-ups to determine the functions of the intraocular lens and the vision’s quality. Surgery cures congenital cataracts in most babies.

How Can Parents Help?

Parents play a central role in the caregiving and treatment of congenital cataracts.

Congenital cataract is a treatable eye condition. Early diagnosis of congenital cataracts is the key to avoid further eye complications. The management of the disease is complex and often requires the guidance of trained ophthalmologists. In addition, adequate care and regular check-ups are required over several months or years to gain normal vision. Always seek immediate medical attention if any abnormalities are observed in the baby’s eye.