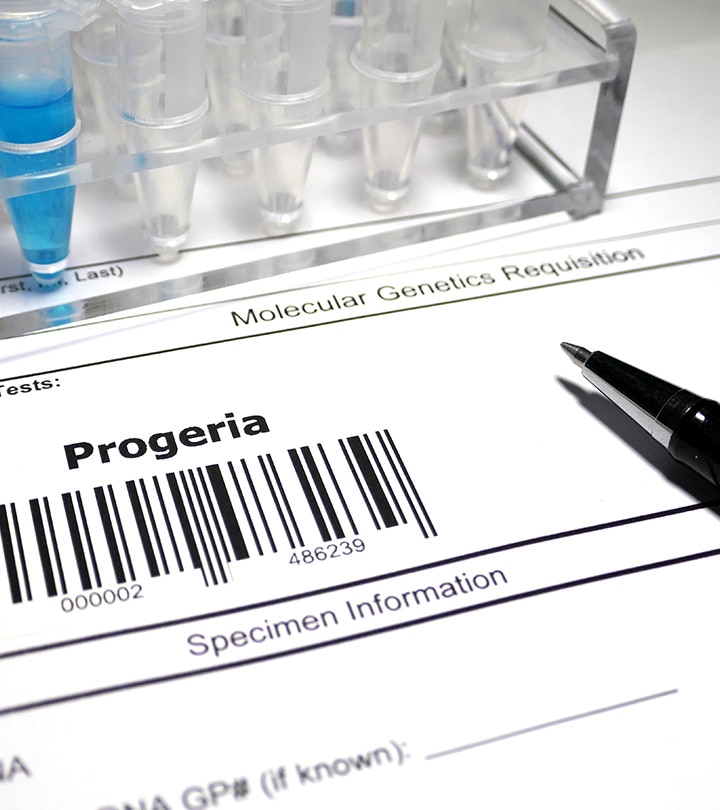 Neonatal progeroid syndrome, also known as Wiedemann-Rautenstrauch syndrome, is a type of progeria (a rare, progressive genetic disorder), which causes an aged appearance at birth, developmental delay before and after birth, sparse hair, and loss of fat under the skin.

This condition is believed to affect one in four million newborns all over the world (1). Neonatal progeroid is likely to be inherited in an autosomal recessive manner (2). Most individuals with neonatal progeroid have a life span of a few months. However, in some cases, individuals have lived into their teens and sometimes into their 20s (3).

Read the post to know more about its signs and symptoms, causes, diagnosis, and possible treatment options.

Neonatal progeroid syndrome presents itself through several complex signs and symptoms, which could vary among babies with the condition. The signs could be visible before birth during prenatal ultrasounds and could be confirmed at birth. In most cases, parents may spot changes in the baby’s physical appearance, or the doctor may notice them during routine checkups.

The signs and symptoms of the neonatal progeroid syndrome in babies include (3) (4):

These signs may also occur in other problems, such as birth defects, in babies. Therefore, seek doctor consultation as soon as you notice them.

Apart from the symptoms discussed, some infants with neonatal progeroid syndrome develop other complications, too (3).

Neonatal progeroid syndrome is believed to be an autosomal recessive genetic disorder. The baby inherits one copy of a mutated gene (an altered gene that forms faulty proteins) for the same trait from each parent.

The progeroid syndrome occurs when there is a mutation in the gene called POLR3A. This gene makes the subunit (the largest piece) of an enzyme called RNA polymerase III. This enzyme helps synthesize several types of RNA, which, in turn, assemble amino acids into proteins.

Due to the defective POLR3A gene, the assembly of amino acids is affected, and abnormal proteins are made. These proteins may hamper an individual’s normal development and function, but how the symptoms are exactly expressed remains unknown (5).

The symptoms of a recessive genetic disorder, such as neonatal progeroid syndrome, are only expressed when the child receives a defective gene copy from each parent. If the child receives one mutated gene and a healthy one, the child will not show symptoms but will become a carrier.

If both the parents are carriers, the risk of having an affected child is 25%, a carrier child is 50%, and a child with normal genes is 25% with each pregnancy. Parents related by blood have a higher chance of having children with genetic disorders because they might carry the same mutated genes (2).

Sometimes, an ultrasound can diagnose neonatal progeroid syndrome before birth (prenatal diagnosis) by identifying characteristics, such as growth disability or unusually large head.

However, in most cases, the healthcare providers detect progeroid syndrome during regular checkups after the birth of the child. The characteristic symptoms, such as deficiency of fat layer, a prominent head, and unusual facial features, help identify the disease.

Other specific tests are also conducted to identify the problems associated with neonatal progeroid syndrome. These are:

There is no specific cure for neonatal progeroid syndrome since it is a genetic condition. Treatment options are primarily supportive, reducing the intensity of the symptoms and improving the child’s life quality, especially as they grow older.

The treatment of neonatal progeroid syndrome is symptom-based and differs from one child to another. In most cases, the best approach is discussed by a team of doctors, including neurologists and physical therapists. The primary focus could be to ensure the baby gets adequate nourishment. Therefore, feeding tubes could be utilized in many cases. As the baby grows older, different types of therapies could be suggested to help the child have minimal limitations due to the syndrome (6).

The symptoms of neonatal progeroid syndrome start developing soon after birth, so you must see a doctor if you find any unusual changes in your child. It is important to seek help from specialists, create a supportive environment at home, and include the baby in as many activities as possible. Talking out your concerns during a professional counseling session may also help manage the condition better.