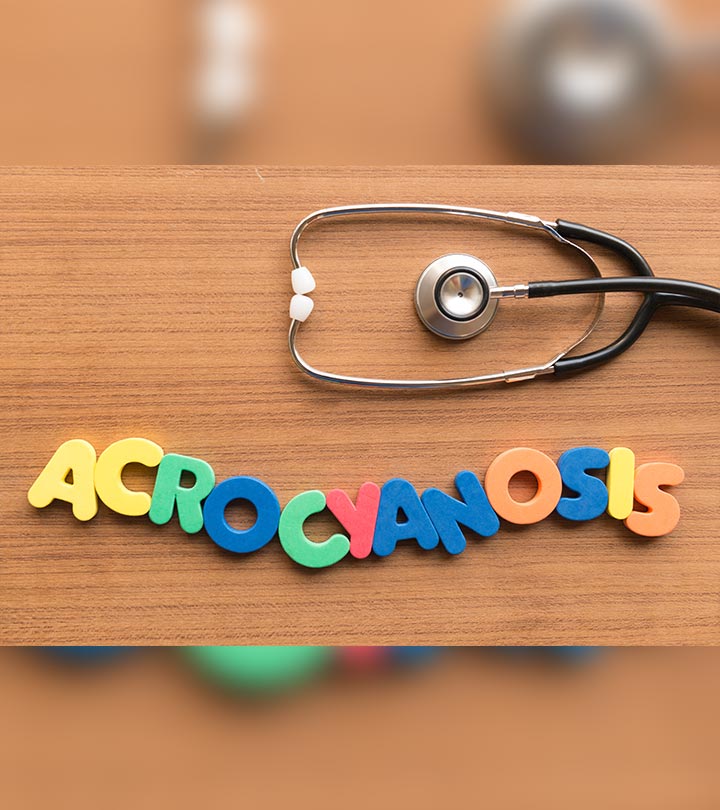 Cyanosis means bluish-purple discoloration of the skin. Acrocyanosis refers to the cyanosis seen in the body’s extremities, especially in the palms and soles. It may also be seen around the lips. In most cases, acrocyanosis is normal in babies, as long as there is no cyanosis in the central part of the body.

Read this post to know more about the symptoms, causes, risk factors, diagnosis, and treatment of acrocyanosis in babies.

Symptoms Of Acrocyanosis In Babies

Painless bluish discoloration of hands and feet is the most notable sign of the condition. The following signs and symptoms may also be seen in acrocyanosis (1) (2).

Causes Of Acrocyanosis In Babies

The exact cause of primary acrocyanosis is unknown. In newborns, a change in blood circulation could be the primary reason. Constriction of blood vessels that transport oxygen to the limbs may lead to acrocyanosis.

Secondary acrocyanosis usually happens due to an underlying condition and might be accompanied by pain in the discolored areas. It may be seen along with central acrocyanosis. It may happen in conjunction with one of the following conditions.

Is It Normal For Newborns To Have Acrocyanosis?

It is normal for most newborns to have acrocyanosis for a few hours after birth (4). The reason is the new blood circulation pattern in the baby’s body. The blood and oxygen circulate to the vital organs, such as the brain, lungs, and kidneys, instead of hands and legs. Once the baby’s blood circulation adjusts itself, the acrocyanosis goes away. It might reappear when the baby is cold after a bath but goes away by itself soon.

The following risk factors may put the baby at a higher risk of developing acrocyanosis (1).

Physical examination and a thorough medical history along with detailed symptom assessment are key contributors to the diagnosis of acrocyanosis. No pain with bluish discoloration is the main sign of acrocyanosis. If the doctors suspect secondary acrocyanosis, they will perform other tests and imaging.

Treatment For Acrocyanosis In Babies

In most cases, primary acrocyanosis does not need any treatment. Pharmacological intervention is not necessary most times. The baby should be kept warm to avoid acrocyanosis due to cold weather. Make sure to wrap the baby in a towel after a bath to prevent them from feeling cold.

Outlook For Babies With Acrocyanosis

Primary acrocyanosis is usually a harmless condition. In newborn babies, it usually resolves on its own and does not recur in most cases. Secondary acrocyanosis must be thoroughly investigated by the doctor, and the underlying condition must be addressed.

Acrocyanosis is normal in babies. Most cases of acrocyanosis in newborns resolve by themselves. If you notice any bluish-purple discoloration in your babies, bring it to the doctor’s attention. Keep your baby warm after birth to prevent primary acrocyanosis. Management of any underlying problems can help avoid secondary acrocyanosis.

Is there an association between parental education level and the risk of malnutrition among children?
$2 million grant to help identify and avert threats for students in rural Missouri schools
Research evaluates neonatal outcomes of pregnancies complicated by maternal obesity
Latino teens are deputized as health educators to sway the unvaccinated
New collection of month-specific infant brain atlas captures fine details of the early developing brain