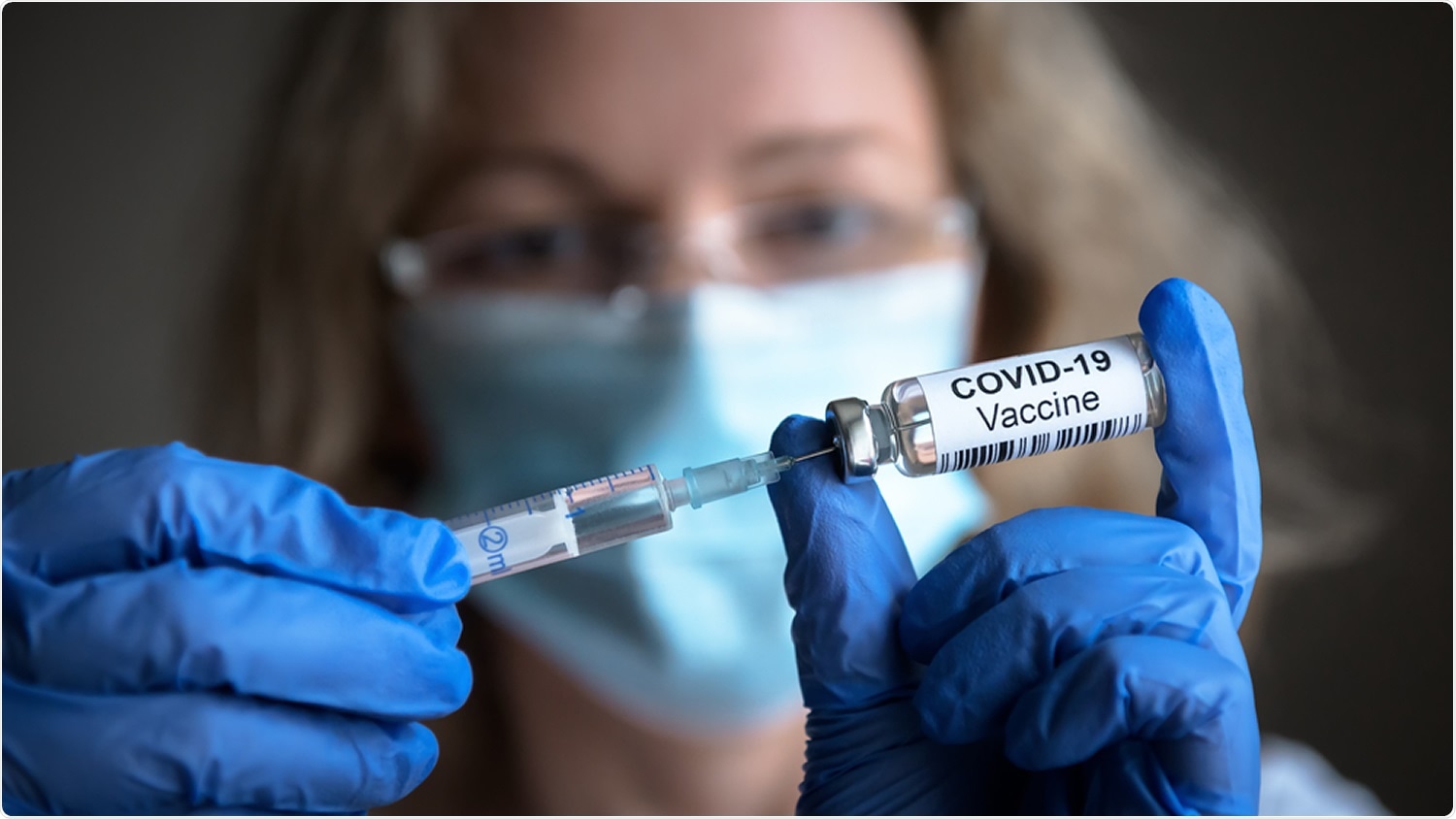 Researchers have warned that the United States has not yet reached the necessary thresholds for achieving population immunity against severe acute respiratory coronavirus 2 (SARS-CoV-2) – the agent that causes coronavirus disease 2019 (COVID-19).

The team – from RTI International in Research Triangle Park, North Carolina, and Pfizer Inc. in Collegeville, Pennsylvania – says that as of August 26th, 2021, not one state had achieved a level of population or “herd” immunity that would be considered sufficient to disrupt the transmission of the virus (78% or higher).

Using publicly available data from the Centers for Disease Control and Prevention (CDC), the team calculated that the proportion of “presumed immunity,” acquired through vaccination or infection, varied substantially between states, from 43.1% to 70.6%.

In 19 states, at least 40% of people had neither been infected nor vaccinated and were presumed to have no immunity.

After accounting for waning immunity, Marie Stoner and colleagues found that the presumed immunity might be even lower, resulting in a greater likelihood of sustained transmission in the United States.

“As more infectious variants emerge, it is critical that vaccination efforts intensify across all states and ages for which the vaccines are approved,” says the team.

A pre-print version of the research article is available on the medRxiv* server, while the paper undergoes peer review.

Population or herd immunity occurs when a sufficient proportion of a community has become immune to a particular pathogen, making transmission from an infected person to susceptible individuals unlikely.

The level of population immunity that is sufficient to limit the spread of a pathogen is usually calculated based on the reproductive number (R0) – a measure of how contagious a pathogen is.

The estimated population immunity threshold for SARS-CoV2 has ranged from 50% to 83%, but it is likely to be even higher for more infectious variants that emerge.

The likelihood of reaching the population immunity threshold is influenced by the timing and patterns of transmission in different geographic areas. It is therefore essential to estimate the proportion of people in a given population that have “presumed immunity” as a result of vaccination or infection. Public health response efforts could then be focused on areas where the most significant impact can be achieved in terms of reducing the risk of severe COVID-19 and death.

However, few studies have attempted to robustly calculate the proportion of presumed immunity by state and researchers have primarily focused on vaccination rates alone.

What did the current study involve?

Stoner and colleagues estimated the percentage of the US population with presumed immunity to SARS-CoV-2 as a result of vaccination, infection or both using publicly available data as of August 26th, 2021, from the CDC.

The estimates were compared to a range of thresholds considered necessary to achieve population-level immunity.

A sensitivity analysis was also performed to account for waning immunity.

What did the study find?

The presumed population immunity ranged from 43.1% in Idaho to 70.6% in New Jersey.

States with the lowest levels of presumed immunity had some of the lowest vaccination rates and in 19 states, at least 40% of the population had neither vaccine- nor infection-induced immunity. 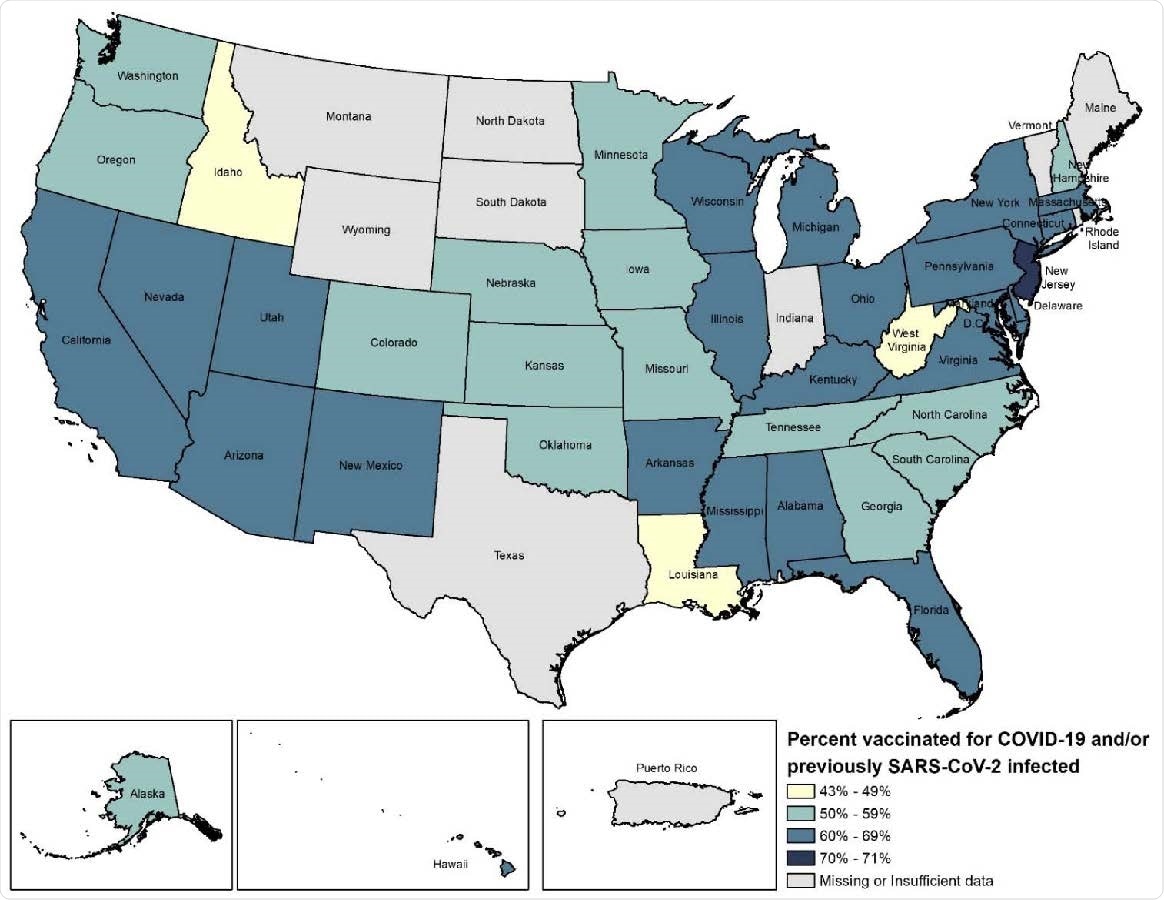 Percentage of the population vaccinated for COVID-19 and/or previously SARS-CoV-2 infected by state as of August 26, 2021

Using a minimum threshold (for less infectious variants) of 67% – corresponding to an R0 of 3 – only four states (New Jersey, Illinois, Maryland, Pennsylvania) would have reached population immunity.

Based on a higher threshold for more infectious variants (78%; R0 of 4.5), none of the states would have reached population immunity.

“Given that the threshold for the delta variant is likely even higher than 78%, we can assume that no states will have reached that threshold,” says the team.

Furthermore, the sensitivity analysis assessing the effects of waning estimated that the level of presumed immunity would be even lower – ranging from 37.9% in Idaho to 62.3% in New Jersey – and that none of the states would meet even the minimum threshold of 67%.

What do the researchers advise?

Stoner and colleagues say that given the low levels of presumed immunity in many states and the possibility that more infectious variants may continue to emerge, it is imperative that vaccination efforts intensify within all states and that uptake occurs across all age groups as soon as vaccines are available.

“Without increased population immunity, the risk of continued transmission and large outbreaks will exist throughout the US,” they warn.

Baby Swimming: When To Teach And Precautions To Take
The safety and tolerability of Remdesivir in children affected by COVID-19
Study: COVID-19 is a significant cause of death in children and young people in the U.S.
OMA applauds American Academy of Pediatrics’ new guidelines for childhood obesity
Baby Wheezing: Types, Causes And Treatment